Still working on the Hawaii pics but in the meantime...

Unfortunately, I am still wading through the Hawaii pictures. There's only about 1300 to go through so please forgive me while I take my time and enjoy revisiting my images. For DP Challenge, the topic for this week was Shoes. I took this to mean foot wear in general and not shoes specifically. In honor of the Olympics I decided skates were a good choice so I spent 15 minutes or so shooting me in my skates. The image I entered, in retrospect, was ok but the one I did after my submission was better. The focus is better and I think I like the editing more on this one. Day Two was another overcast day at least for the north part of the island where we drove that day.  In Alberta there's a saying: If you don't like the weather wait 5 minutes. In Kauai, if you don't like the weather drive somewhere else but it generally doesn't rain everywhere on the island and this day was no exception. Despite the rain it was still pleasantly warm though and our trip to the community of Hanalei was worth the drive.
Along the way we stopped at Kilauea and checked out the lighthouse and bird sanctuary. Well by checked out I mean we stopped at an outlook along the road and we didn't actually drive right up to the lighthouse. There were so many birds along the cliffs it was unreal. At this point I was still thinking the cattle egrets were something cool and unique. By the time we left I would learn that they're as plentiful as gulls are here. On our way to Hanalei, we stopped at a farmer's market in  Kilauea. It was quite different from what my wife and I were expecting. Farmer's markets here in Alberta tend to be semi-permanent stands with throngs of people and vendors. The one we stopped at in Kilauea was three vans parked on the edge of field. Nevertheless, we got some great deals and the people displayed the friendliness we were learning to expect on Kauai. Because of the rain, the vendors weren't getting many visitors so got amazing deals on the fruit we purchased and got to sample a lot of different things including rambutans. These red, spiky fruits have a tough skin you simply nick and then peel open. The fruit inside tastes a lot like a lychee nut. (Rambutans are actually part of the lychee family so I guess that makes sense) We continued our drive to the Hanalei and checked out the beach. I'll probably kick myself until I got back but we didn't get to the Hanalei pier. Its been featured on so many postcards not just for Kauai but the Hawaiian islands in general I am disappointed I didn't get to see it myself.
(I have a picture to put here but um...the computer is being dumb again)
Once we were done splashing around on the beach (the little bit we did anyways) we decided we need to get some lunch. We made our way to small bar and grill in Hanalei called Kalypso.  To our surprise the second game for Hockey Day in Canada was on the TV.  If you guessed that it was the Leafs playing you would be right. Even in Hawaii we had to watch the Leafs before anything else. We decided to have Mai Tais since that seems to be the thing to do when you're in Hawaii. My wife, however, doesn't drink and after having half of hers declared herself unfit to drive. That made me the designated driver which apparently meant my Mai Tai was hers. Funny how that works out. We headed back to our resort on Lawai Beach where we were greeted by blue skies and no rain. By the time we made it back (we took our time naturally)  it was almost supper time but I finally got to see the sunset I had been waiting for. You can view the the set on Flickr or a slideshow of the images.
Posted by Unknown at 6:54 p.m. No comments:

On DP Challenge, someone posted a link to Amazon for the Lensbaby 2.0 listed for 70 dollars. That is incredibly cheap and give you a chance to try them out. I've always enjoyed the images I've seen. Plus the creative aperture kit is 10 buck. Nice!

My wife and I recently enjoyed a fantastic trip to the island of Kauai. Technically the first day was when we landed however that was right at sunset (sadly it was really overcast) so our task was to get a car, grab something to eat after our long flights and get to bed. We started at 7:50 am Calgary time and arrived in Kauai, about 6:30 pm Hawaii Time (which is 9:30 pm Calgary time). A long day to say the least!

However, we were up pretty early after a good night's sleep at our resort and made our way over to Spouting Horn, about 5 minutes away. Yes, day one did not entail any long expeditions. Spouting Horn is named for the geyser-like stream that shoots up from rocks along the coast at that point. There is also a few stalls for vendors to sell relatively inexpensive jewelry.   A lot of pearls, and coral was found at the stalls. It was almost like the Farmer's markets here at home. And of course there were chickens. Chickens are the Official Un-Endangered spcies on the island of Kauai. During hurricane Iniki the chickens got loose and with the all the destruction, rounding up chickens was a low priority. That's of course just one theory. In any event, I don't remember hardly any part of the island that you didn't find the darn chickens! It was also on this day that we got to view the "Tunnel" coming to our part of the island. This tunnel is made of Eucalyptus trees planted by the Scottish rancher, Walter Duncan McBryde over 150 years ago. The treetops were damaged in the last two hurricanes however, as with most vegetation on the island, they have grown back nicely. Which brings me to another point: The Flowers. Hibiscus blooms can be seen everywhere. The original flowers were brought by settlers at different times and have evolved over time into different species. (See this Wikipedia article for more info). To view all the images I've uploaded so far check out my Flickr photostream.
Posted by Unknown at 10:20 p.m. No comments:

As mentioned in my prior post I have been having difficulties with my computer. My hard drive that holds all my photos is going kaput. I'm not sure if I've mentioned it before but you shouldn't backup in case of hardware failure but for when it fails. Its just a matter of time before anything with moving parts (i.e. hard drives) will fail. In other words, its not a question of if a drive will but when.

Fortunately, most of my images are backed up. I was in the process of backing up my Hawaii images when the drive started giving me problems yet again. In fact it looked like about 350 or so images were missing. When I uploaded them originally to my PC it took hours. It royally sucked knowing that I had to do the whole process over again. I decided to purchase a card reader. I used to have one but found that it wasn't any faster than transferring from the camera. My printer has a card reader but it only operates on USB 1.0 which is really slow.  However, I wasn't going to spend my whole evening once again transferring the same image so I gave SanDisk's ImageMate a try. Wow! I've already uploaded my 2 - 2GB cards and I just finished transferring a 1 GB card while I wrote half of this paragraph. I'll probably have all of my photos transferred before I am done writing this post.

I really have to wonder why I didn't get a good card reader before. This gizmo is SUCH a time saver. In less than 15 minutes I transferred over all the files that it took me hours to upload before. Amazing...but true!
Posted by Unknown at 7:28 p.m. No comments:

Alright. I am already back from Hawaii so its not aloha from Hawaii. I'm sad because it was around 24/25 degrees Celsius when I left Kauai and its around -10 here now. Lovely. Good-bye shorts and "slippahs" (sandals). Hello parkas and snow boots.

My computer has been giving me troubles so I haven't been able to go through my images. I do feel I owe this blog at least ONE picture however. This image was taken at about 6 am one morning. Exposure time was about 30 seconds. I packed my tripod in my 60+ liter backpack because it wouldn't fit in my suitcase.

It was absolutely beautiful. I hope this does the scene justice. 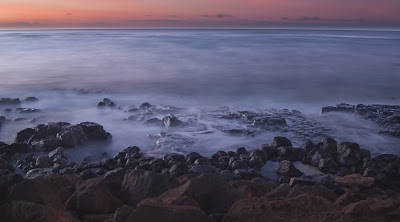