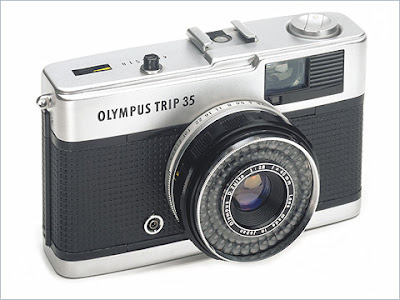 The very first camera I ever used was my mom's Olympus Trip 35. Olympus made over 10 million of these handy little camera's between 1968 and 1988. She got it back in the 60's or early 70's so its older than I am. My first shots, if I am not mistaken were taken at my cousin's wedding when I was a ring bearer. I'd estimate that I was 3 or 5. Based on that fact, I have been taking pictures for around 30 years. Crazy!
When I got my Nikon D50 my mom gave me the camera as she is using a digital point and shoot now. (Prior to that she had a "modern" film point and shoot). I brought it home and took a few pictures with it. Unfortunately, when Renae and I moved into our new house I wasn't able to locate it. At least until tonight.
Renae and I were cleaning up our basement this evening. I've been looking for the old camera at least once every month or so. In the one container I was sure it was in I found it. I swear I had tore that Rubbermaid container apart at least 8 times in the last year without finding the camera.
So besides being significant in that it was the first camera I ever held in my hands, it also gives me another way to experiment with film. I enjoy my Holga but this allows me to use 35 mm film and, if I use a flash, I can even adjust the aperture.
The thing that has appealed to me about this camera since my mom gave it to me is the fact that it doesn't require batteries. It has selenium cells around the lens to power the light meter.
The manual can be found here:
http://zuserver2.star.ucl.ac.uk/~rwesson/esif/om-sif/camhistory/manuals/olympustrip.pdf
There's even a site dedicated entirely to the Trip.
http://www.tripman.co.uk/
The image I've uploaded isn't quite the same as the one I have. Apparently the ones with the black shutter release are a little newer. Mine is chrome.
Posted by Unknown at 10:37 p.m.